So you speak to me of sadness and the coming of the winter,
The fear that is within you now that seems to never end,
and the dreams that have escaped you and the hope that you’ve forgotten,
and you tell me that you need me now and you want to be my friend,
and you wonder where we’re going, where’s the rhyme and where’s the reason?

Is it not ironic that at times when we stand close to a momentous event, seeing it unfolding in all its HD brilliance, we tend to miss the wood for the trees in terms of its future impact? So it was when the Berlin wall came down; most folks saw it as the factual German reunification rather than the tectonic ideological change about Communism it portended. So it is with the Occupy Wall Street protests, mostly being seen as anger against job losses and lack of economic opportunities rather than something more structural.

As I look around, I see a march of seemingly unrelated trends and events.

During this year’s Davos meet of the World Economic forum, failures of the globalised market economy and an ‘uncertain future’ of Capitalism became the main issues. Ironic when you consider that over the years, Davos has become a byword for Globalisation.

I notice that Capitalism and Globalisation, those two economic pillars of the last few decades, appear to be losing flavour. So, is the world at some kind of an inflexion point?

I believe we have begun grappling with a massive socio-economic change. A change ushered in by programmable machines, networks and the World Wide Web. I had spoken of this in some detail in an earlier post. I say again that technology implementation is resulting in massive shifts at the work place as also how the very concept of work itself needs to be viewed. For the first time in history, technology, without human intervention, is adding economic value and wealth. So those getting in ahead of the game in terms of controlling technology are the new millionaires, displacing the aristocrats and industrialists of the last century. And these millions are being created thick and fast with hardly the need for additional employment generation. Not only is this fuelling a widening wealth gap and disparity, it is leaving more and more of the population behind, unemployed and dispossessed.

Small wonder therefore that a recently published global Wealth Report indicates that most of world’s richest people became richer through the recent economic downturn and into 2011. When in fact the average middle class family actually saw its income fall in real terms. According to Economist Paul Krugman. the current disparity gap in the USis the biggest since the 1920s. Clearly we have entered a landmark period of inequality where the gap is widening to unprecedented levels. 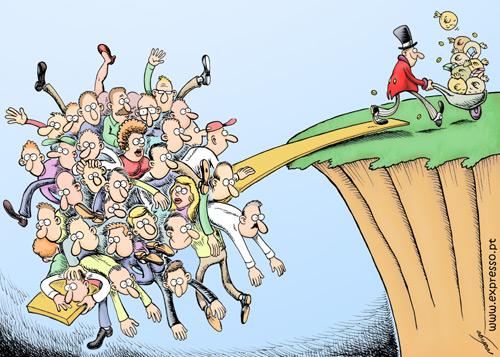 But do you know where the core irony of this whole situation lies? Well it happens to be our much vaunted economic models that not only failed to predict but also to come up with solutions to handle the inequality problem. Worse, if we were to go by economic theory, it is possible to show overall economic growth while significant part of the population is facing a recession or mired in poverty!

So if the predictive reliability of modern economics cannot be relied on, what do we as a society fall back upon? I sense fear as political leaderships all over brace themselves against increased social and political backlash of a growing global inequality. In the Occupy Wall Street protests. In the Arab Spring uprisings. In the resurgence of Marxism in the Indian tribal belts. In the eschewing of the rugged Thatcherism by the British Conservative party as it swing towards leftist policies.

There remain vestiges in our societal psyche of what happened a century back. The chasm between rich and poor opened up by the industrial revolution had been one of the main factors that led to the massive unrest in the first half of the twentieth century. Reaction to this had culminated in adoption of the Communism model in large parts of the world.

I believe we have once again reached that inflexion point where conditions are ripe for the coming of Socialism’s ‘Second Wave.’ I see this as a reaction to the perceived failure of the Capitalistic model and the kind of Globalisation and growth it has spawned. This Second Wave would need to show us ways of re-distributing the wealth created by that part of technology working without human intervention.

Would this be the way Inequality would give us our rhyme and our reason for the future?