Like a beast awakening, the British Howitzers and cannons roared to life. The searing flame moved from right to left as the guns fired in sequence. Ram Prasad saw the charging infantry getting mowed down as he saw the General himself getting hit and toppling from the horse.

“Charge!” Ram Prasad heard his own voice calling. He saw his men as they rose from behind the embankment and moved forward. The unforgiving howl of the British guns erupted again and he saw his brave men falling all around him.

But why was a large part of the Bengal army not moving? He felt a searing pain in the left shoulder and then in the abdomen. Blood erupted from his body, he had been hit. But still, the main flank of the army remained stationary. Indeed, they seemed to be mute spectators of the massacre.

The Battle of Plassey was a decisive victory of the British East India Company over Nawab Siraj Ud Daulah of Bengal on 23 June 1757.The battle took place at Palashi on the banks of the Hooghly River, about 150 kilometres north of Calcutta and south of Murshidabad, then capital of Bengal.The outcome of the battle was to change the history and shape of things to come for ever not only for India, but as some say, for the world, in terms of ascendancy of the British Empire.

The battle of Plassey features in the story ‘The Chronicler of the Hooghly’, part of my forthcoming book of the same name.

We booked the sunset cruise on the Hoogly recently. With winter on its way, the sun was setting early leaving behind a long balmy evening. Good time to observe the river and the city as it transitioned from day into the night. 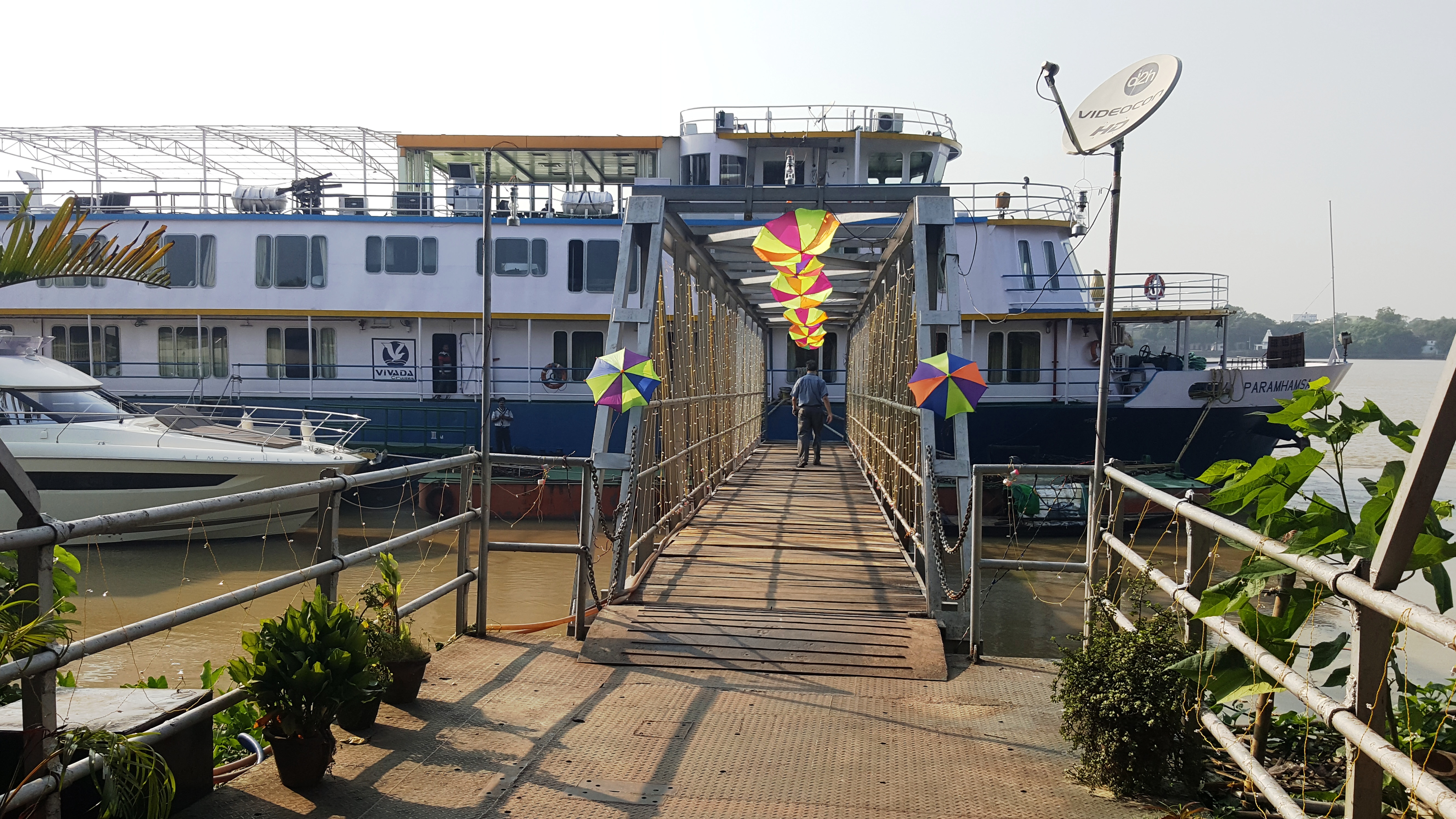 Boarding the boat from the Millennium Park jetty, we soon chugged out in the company of other sight-seekers like us. The itinerary was to cruise up the Hoogly to Belur Math, the much revered global headquarters of the Ramakrishna Mission founded by Swami Vivekananda. We were scheduled to reach in time for the evening Aarati before we returned. Travelling with us was a Study tour group from Germany.

As I sat on the deck, I was engulfed by a kaleidoscope of sights………….

Of the looming floating bridge of Howrah, still considered a cantilever feat of engineering seventy-five years after it was built. Of decrepit ghats and jetties. Of derelict and abandoned warehouses, shanties and slums. Of colonial architectures separated by grimy and slushy by lanes. Of how Man’s creativity and resolve has sunk under the grime of his daily struggle and existence…………. 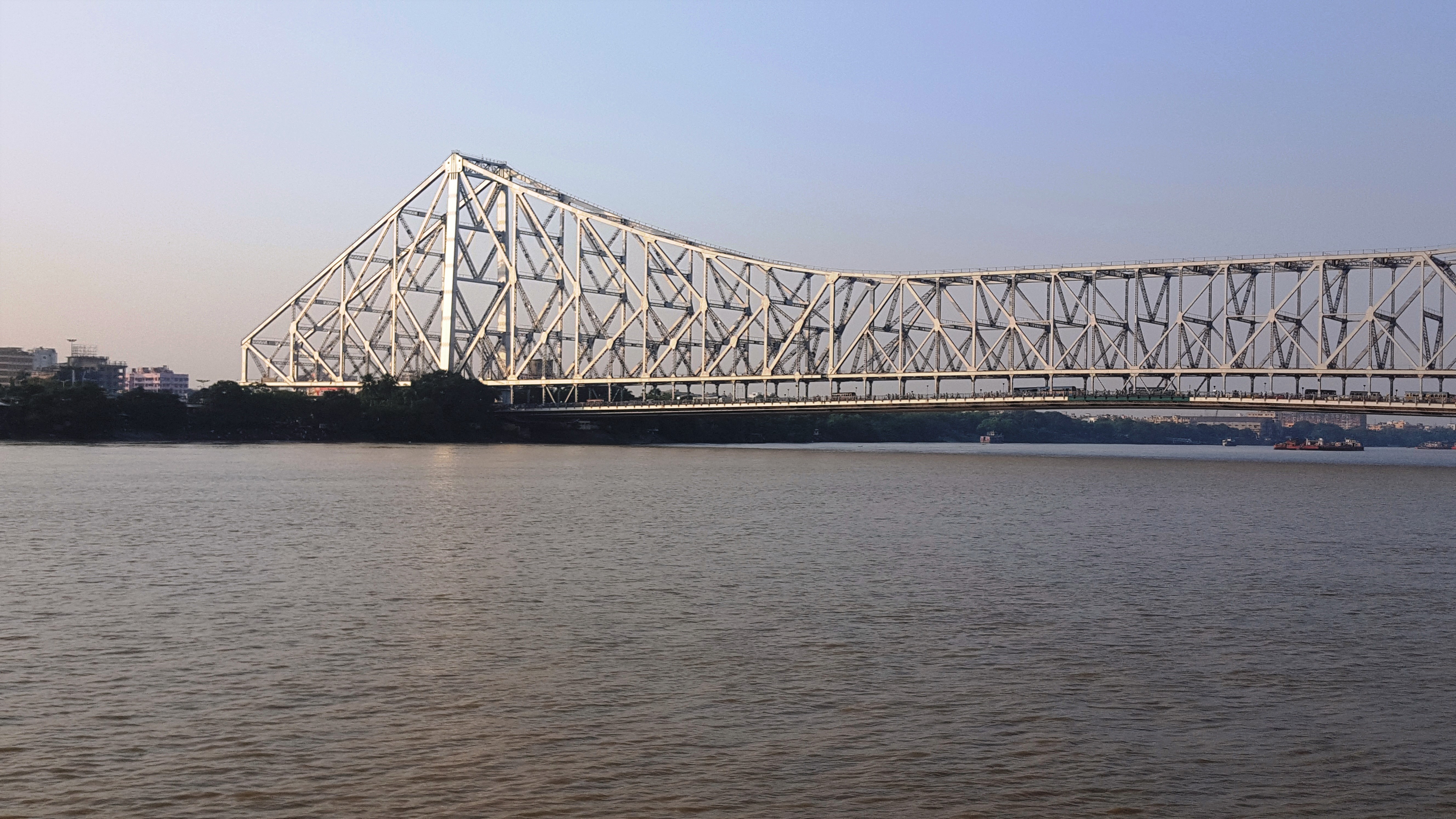 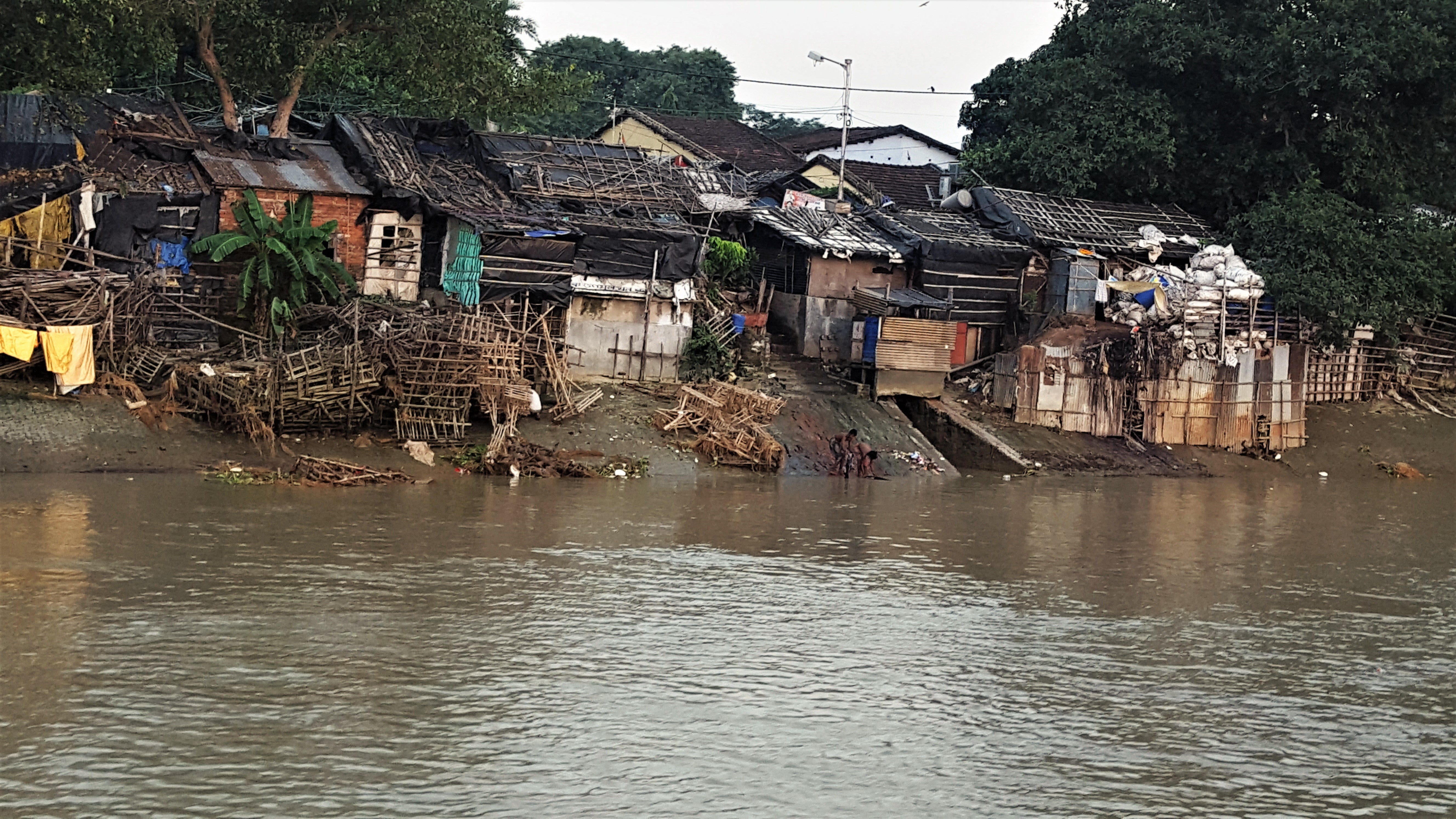 Of temples and riverside religious rituals coexisting with stinking garbage and defecation grounds. Of the riverside walled up   along long stretches as if to hide its shame from the very people who have sullied it thus. Of how Spirituality jostles with poverty……. 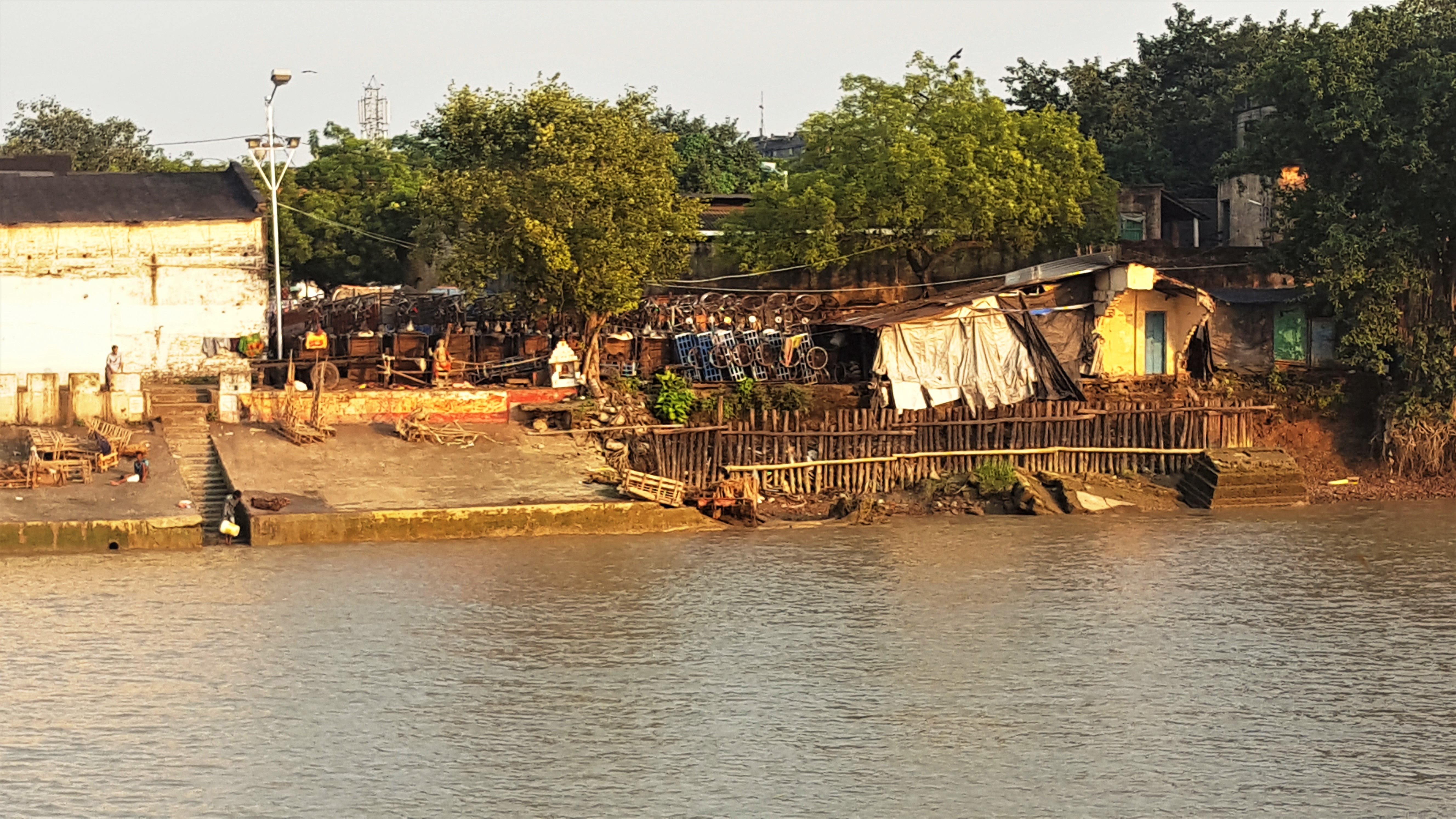 My thoughts and emotions get stopped by a flurry of activity on the deck. Probably sensing the approaching sunset, the service staff had got busy offering beverages and ‘muri and aloor chop’ snacks while the German tourists were busy with their telephoto lenses and cameras. I look at the setting sun, the morphing shades of the flowing waters and could not but marvel at how nature yet manages to shine its beauty on an environment gone increasingly awry………… 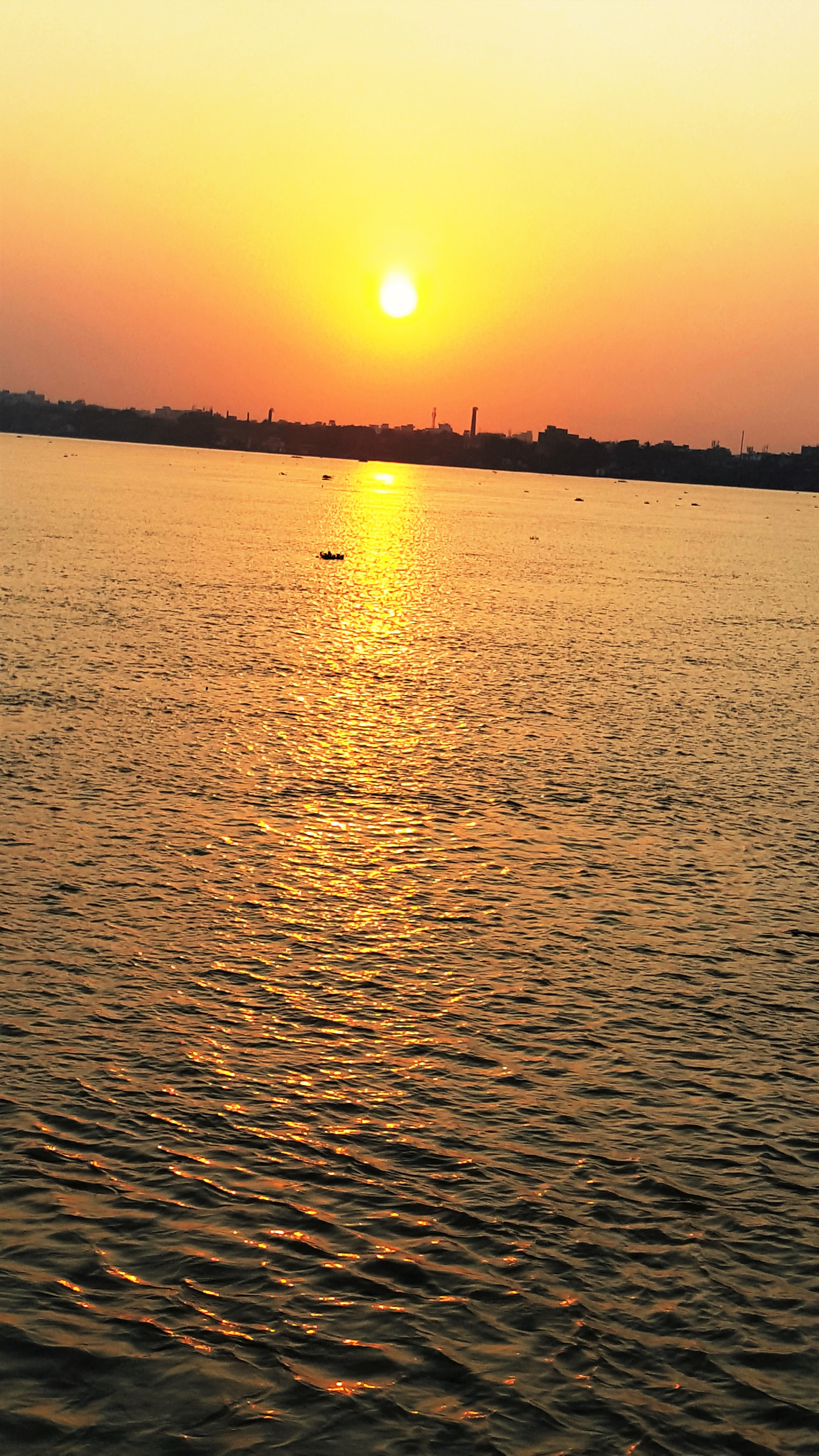 With the falling dusk, I notice a lone figure sitting at the rear side of the deck. Somewhat taken aback for not having noticed this person earlier, I walk across and introduce myself. “You may call me the Chronicler”, he tells me. Intrigued I plonk into a deck chair beside him. “Would you like to hear a tale about all that we are witness to today?”, comes the soft voice. Even before I can respond, the voice continues.

“Great metropolises, they say, grow out of a river. London…. Paris….. Rome…… Moscow…….. Cairo….. Istanbul. In each of these cases, the mighty rivers that flowed, the Thames, the Siene, the Tiber, the Moskva, the Nile and the Bosphorus, provided sustenance and remain the heart and soul of the cities….”

“And so was the symbiotic relationship between Hoogly and what we know as Kolkata. While today we are wont to see the river as some kind of an appendage to the city, what if I told you that it is really the other way around? That Kolkata is really an offshoot of all that the Hoogly has been witness to over the centuries.”

“When we started our cruise, we saw Fairlie Place and its jetty to the right with the Strand running beside it. So what would you say are its important landmarks?”, the Chronicler asks.

“Well I suppose it is the Customs House and the Eastern Railway headquarters. Apart from a few more important office blocks”, I respond.

“But what if I told you that about three hundred years back most of that place including what we know as Dalhousie Square was a large water body called Lal Dighi ? This was the time when the British East India Company was busy consolidating its position and Fort William stood on the banks of Hoogly. That is when the attack happened”

“The then Nawab of Bengal Siraj-Ud-Daulah attacked, captured Fort William and incarcerated British prisoners in a dungeon which came to be known as the Black Hole of Calcutta. An incident which directly led to the battle of Plassey and the subsequent two hundred years British Rule of the subcontinent.”

“Hang on!”, I interject. “Is not Fort William more in the hinterland, near the Maidan?”

“Indeed”, the Chronicler continues, “but what is less known is that there were two Fort Williams. The present one near Maidan was built by Robert Clive after the attack on the first one.”

“The battle of Plassey, which was to change the history and the shape of things to come for ever for the subcontinent, was also fought on the banks of Hoogly but to the north of where we are. But that is another story.”

“The Fairlie Ghat holds another interesting tale”, the Chronicler continues.” In the mid nineteenth century, Prince Dwarkanath Tagore, while travelling on a train in England, got the brain wave of setting up a rail link to carry coal from his Raniganj colliery to the Calcutta port at Fairlie. On return he invested into setting up the ‘The Great Western Bengal Railway Company’. Unfortunately, his proposal got turned down by the British East India Company bosses on the grounds that ‘it would not be possible to allow a company using such strategic technology under native management….’ His efforts and thoughts however did push the British to set up rail services though the East India Railway Company with its Headquarters at Fairlie Place.”

“Hmm! That name Dwarkanath Tagore sounds familiar. Was he in some way related to Rabindranath Tagore?” I muse.

“Indeed he was!”, the Chronicler quips back, “He was in fact the grandfather of Gurudev Rabindranath Tagore, that venerable Bard of Bengal and the first non-European to win the Nobel Prize in Literature more than a century back”.

“The Hoogly ghats then were a far cry from the crumbling cesspools that we are seeing today. With magnificent facades and European classical architectures, the ghats were witness to impressive steam ships and tall masted  boats sailing out to faraway places in England, Australia and New Zealand as also upstream to ports on the Ganga.”, the Chronicler continues.

“Did you know that there were thriving French, Dutch and Armenian settlements on the Hoogly in the early years of colonisation?” I am asked.

Well I had read about the French settlement and I say so.

“Fascinating is it not that events and rivalries five thousand miles away in Europe would show up in the waxing and waning of the Hoogly ghats! And so it was that as the British colonialism went into ascendancy after winning the Napoleonic Wars in early nineteenth century, the settlements of other nationalities on the Hoogly faded into oblivion.” 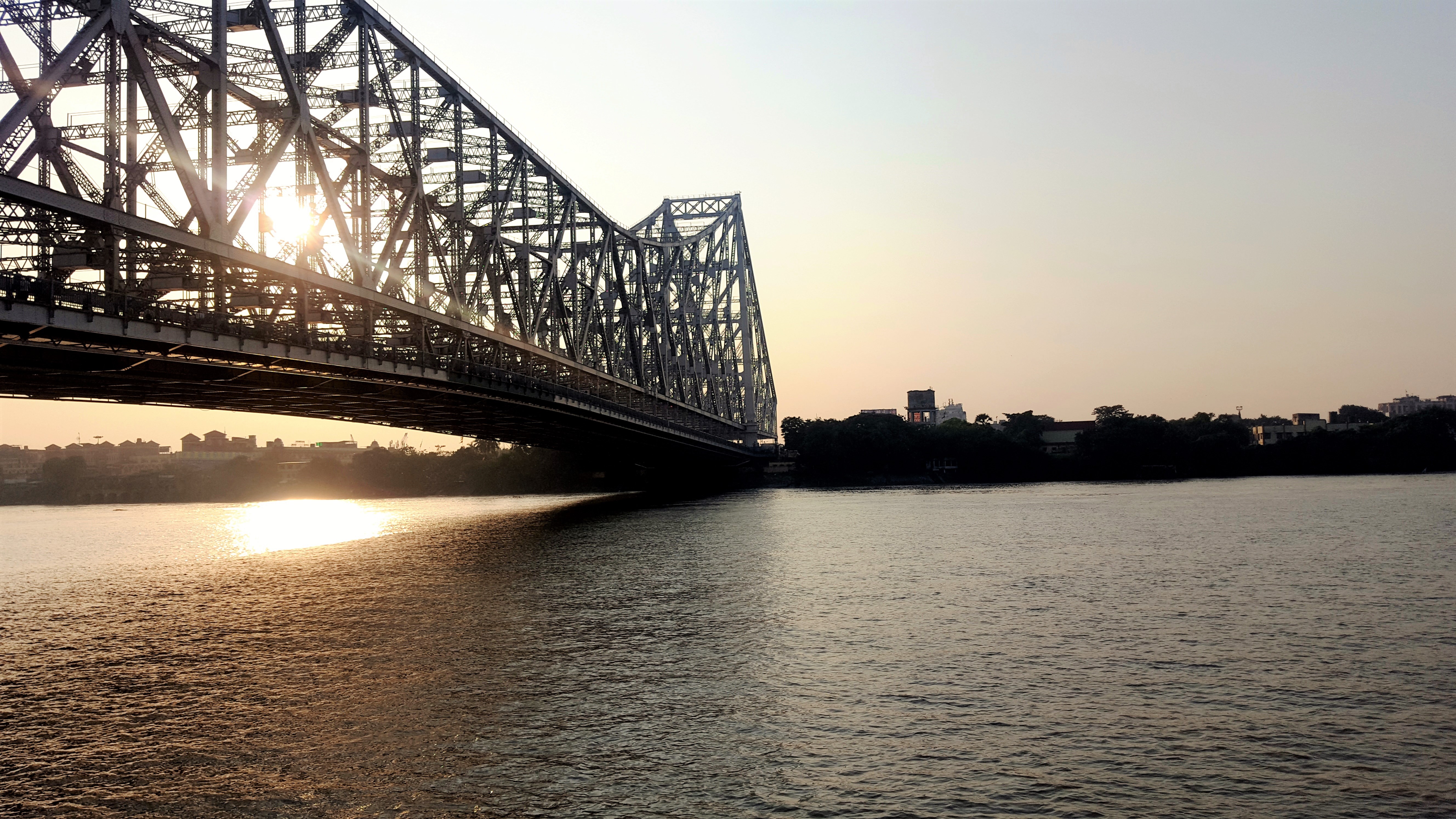 “Which brings us to the Shova bazaar Ghat and its fascinating history. The Ghat and the Shova Bazaar Rajbari ( Palace), was built with great pomp and grandeur by Raja ( King) Nabakrishna Deb.The latter famed for organizing the Shovabazaar Rajbari Durga Pujo about two hundred and  fifty years ago ( which continues till today!). What is seldom spoken of is that all of the Raja’s wealth came from the huge bribe money of Rupees eighty million paid to him, Mir Jaffar and a couple of others by the British administration for betraying Nawab Siraj–ud-Daulah on the battlefield of Plassey. A betrayal which led to a small British force of 3000 soldiers winning a decisive victory over a twenty times larger opponent. A betrayal which led to the British becoming the dominant colonial power in the subcontinent for over two centuries. Is it not ironic that one of the greatest betrayals in Indian history is so inexorably linked to one of the biggest religious festivals in the country?”

So engrossed had I become in listening to the Chronicler’s tales that I had scarcely noticed the darkness enveloping the Hoogly and the boat engine slowing down.

My companion on the deck points to a brightly lit temple and ghat complex to the right. “That is the Dhakshineswar Kali temple built in the mid nineteenth century by Rani (Queen) Rashmoni based on a dream in which Goddess Kali exhorted her, ‘There is no need to go to Banaras. Install my statue in a beautiful temple on the banks of the Ganges river and arrange for my worship there. Then I shall manifest myself in the image and accept worship at that place.’ The temple attained fame because of Ramakrishna Paramhansa, the famous mystic and the spiritual guru of Swami Vivekanand.”

The boat docks on the Belur Math Ghat. I notice the Chronicler making no attempt to get up even as other guests disembark and start walking up the Ghat steps. The tour supervisor advises us on the way to reach the temple premises for the evening Aarati. As we hurry, some of the German tourists stop to look at souvenirs in the roadside shops.The Belur Math design incorporates the different Medieval, Gothic, Renaissance as well as Hindu and Islamic styles that Swami Vivekanand had observed during his travels in India and abroad.

I return back to our moored boat with the intoxicating chants of the Aarati still resonating in my ears. As the boat starts on its return journey downstream, I look around for the Chronicler but he is nowhere to be seen. Dinner is announced and we go down to the dining room in the lower deck. The fascinating vision of the Hoogly  created by the Chronicler’s tales in sharp contrast to the hugely run-down and depressing sights I had been witness to, continues to wrestle in my mind.

What is it that has made the Hoogly hold onto its rusting warehouses, its hideous shanties and walls which no longer serve any purpose? What is it that has made Kolkata turn its back on the river that brought it into existence? What is that which leads us to abuse and neglect that very water that we consider holy and religious? What is that in our societal psyche that fuels such dichotomy?

As we reach back and walk off our cruise, these questions continue to haunt…..