If you can keep your head when all about you
Are losing theirs and blaming it on you;
If you can trust yourself when all men doubt you,
But make allowance for their doubting too:

If you can fill the unforgiving minute
With sixty seconds’ worth of distance run,
Yours is the Earth and everything that’s in it,
And—which is more—you’ll be a Man, my son. 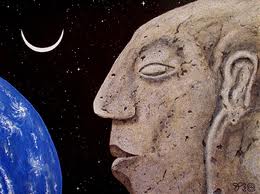 Awhile back, a friend while commenting on an earlier blog, remarked, “I simply cannot stop wondering if this indeed is the beginning of the end of ‘Kali yug’ that the Hindu sages predicted many millennia back! Or for that matter, the 2012 ‘end of the world’ that the Mayans predicted around the same time? Can we really dismiss the two geographically so very distant people foreseeing the same future as ‘mere’ coincidence?” This bringing together of Hindu and Mayan prophesies I had found intriguing and had also recalled Nostradamus’ prediction about the end of the world.

The thought came back the other day as I sat reading about the Large Hadron Collider (LHC), that 27 Km long particle accelerator clicking away deep below the Franco Swiss border. And the underlying concerns that “earth would be destroyed and the galaxy gobbled up by an ever increasing black hole” as the LHC ramps up its operations and reaches its maximum power levels. Yet one more doomsday prediction.

What is it that has tempted Mankind through the ages to speculate on this end of the world theme? Has it been Man’s imagination going ballistic based on various apocalyptic events the world has faced? Or is it some other flaw in mental makeup?

Which brings me to that age-old tug of war within ourselves. We seek knowledge and at the same time avoid it. Our primal instincts conditioned us to make sense of the world around us as else there was always that fear of “what we do not know”. So we fit all we know into that “comfort space” which we have created and close our minds to uncomfortable facts that do not fit.

The doomsayers’ inherent belief is that in case everything does not fit into their prescribed paradigm, the world becomes unfixable and therefore doomed.  Theirs is a mindset of seeing all things in black and white. A perspective that stems from the same closing of minds to facts that do not fit, an underlying belief that what we know is really all that is there to know.

The doomsayers refuse to “see” the positivity, hope and initiative that abound all around us. They ignore any mid path there might be that the world can indeed be “saved” from the holocaust which they has consigned it to in their minds.

We may ridicule the above mindset but do we realise that we carry a bit of the doomsayers belief in each one us? A belief that surfaces when we try and stick to our old ways and resist change. When we wallow in a sea of negativity as we move with the crowd. When we block ourselves from empowerment and positive intentions. When we decide to wear someone else’s coloured glasses rather than be guided by our own core values. When we decide to live by others’ dreams and aspirations, not our own.

So, can we regain the conviction of our own selves to seek positivity and embrace change to inherit the Earth as Kipling’s Man? Or do we want to regress back to when the doomsayers believed the Earth was flat , and we could fall over the edge if we set forth to seek the unknown?